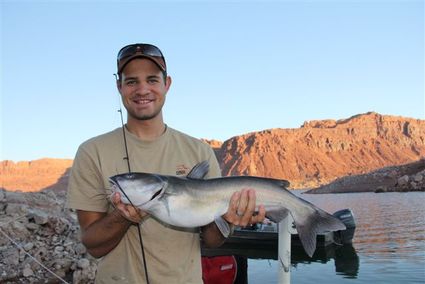 SIX ON SIX -- Joey Soccomanno, Church Wells, Utah, really likes to catch catfish. On a recent trip to the San Juan he caught six cats on six casts with the last one being this six-pounder.

Individual fish species are evenly divided and are holding caucuses to decide how best to move forward from this point. Adult Stripers would like to open the gates and let more anglers come in so they can reap the rewards of anchovy chum falling from the boats in all the locations that have proven to be great feeding spots all summer long.

They revel in the free food that comes to them without effort. Young Stripers and smallmouth agree that finding plankton on their own without any assistance is the best way to feed their cohorts. Trophy fish with big brand names really don’t care about fish politics since they can eat anything that happens to swim close by.

Largemouth Bass and crappie are demanding that the lake be held at the current low level so brush can grow and provide nursery habitat for their offspring to be produced in 2014. They receive no support from Stripers, carp, catfish who are doing just fine in the current fish economy.

It’s a standoff. The just cannot agree on how to make the best plan to help all fish that swim in Lake Powell.

Anglers, when allowed to return to the lake, will find a big change. Dropping water temperatures have allowed a change in feeding location and habits. The standard main channel walls are not producing as they have in the past.

Young Shad have been hiding in the backs of canyons in warm water where larger Stripers could not enter. Now with temperatures near 70, game fish have free access to deep and shallow water.

Here is the lake-wide strategy for catching bass and Stripers. Since forage is not abundant, it is important to find the few locations where both Shad and Stripers congregate.

Narrow coves off the main channel with a dry stream bed in the back are prime locations. Look for one that had a recent flash flood event where floating debris and even brush and cattails were washed into the water.

Bass use the floating brush as cover and Stripers hold out near the mouth of the cove daring any Shad to swim toward open water. Graph the 60-70 foot bottom depth range to locate stationary striper schools.

The narrow coves I found had a fresh flood slot canyon in the back with submerged brush that had washed down from recent flood events. Smallmouth bass came up for topwater lures and whacked them consistently but were hooked less often.

Largemouth Bass were located in the same habitat particularly those with dense floating “peat moss” 2-3 inches thick that had to be parted before the lure could be dropped to the bottom.

Plastic grubs jigged up and down from the surface to 5 feet deep just under the peat were readily accepted by largemouth. Striped bass were layered in the deep water with large, thin fish at the bottom, healthy 2-pound fish at mid depth and small fat yearling fish near the surface.

Spoons bounced on the bottom caught the larger Stripers while speed reeling was best for the younger healthier fish. My technique is to drop the spoon to the bottom, jig it 3 times, then reel as fast as possible for 5-10 turns. Then pause the lure and jig it twice before reeling as fast as possible for another 5 turns. When the lure was close to the top, chasing Stripers could often be seen following it all the way up.

Fishing is improving each day. Hopefully, the political shut down of Lake Powell will lapse so that anglers can enjoy the great rewards before water temperature drops into the 50s.