The Hook Is Set For Autumn Fishing

All lakes were stocked again with channel catfish the week of Sept. 30 – Oct. 5. Fishing for catfish is good to excellent now that the fall stockings have resumed.

The Sept. 19 stocking was loaded with incentive-size catfish in the 3-8 pound range. Mornings and evenings are the best times because catfish prefer to feed under dim or dark conditions.

Top baits for catfish have been stink baits, shrimp and worms fished on the bottom in the deeper lake sections.

Use smaller sinkers and 8-pound test line to get more hookups. In the Tucson area, extra catfish will be stocked this fall season into Kennedy and Lakeside lakes due to the suspension of catfish stockings at Sahuarita Lake.

Fishing for bluegill is good along the shorelines in 4-6 feet of water. Try mealworms under a small, thin bobber for great action. As lake temperatures fall below 76 degrees, expect better action for Largemouth Bass, especially in the early morning periods.

Try finesse plastics rigged dropshot or Texas-style for the Bass, and mix it up with small crankbaits, soft jerkbaits or spinnerbaits.

At Green Valley lakes (Payson) anglers are having good luck for bluegill and crappie using worms and small jigs. The fall kick-off date for trout stockings to resume is Saturday, Oct. 19.

The initial fall stocking of catfish on Sept. 19 included a jaw-dropping array of catfish in the 3-8 pound range.

Mr. Fish, the Arkansas-based fish vendor that delivers the urban fish, loaded their trucks up with tons of huge catfish. The older ponds from which they netted the fish held incentive-size channel catfish averaging 3 pounds each. One catfish was estimated at 9 pounds and many others were in the 5-7 pound class.

Reports of 20-pound, four-fish limits have been pouring in from excited anglers. Urban fish biologists estimated that 70 percent of the delivered catfish were well over the 1.7-pound average that the program usually orders.

“I’m thrilled to deliver a load of trophy-class catfish to our urban anglers every once in a while and create exciting memories,” explained Eric Swanson, manager of the Urban Fishing Program. “Yet, since we pay for catfish by the pound, the larger fish mean fewer fish to go around.”

The next three fall deliveries of catfish are expected to include fish closer to a 2-pound average. The fish supplier plans to load fish from different ponds that contain a majority of regular size catfish with a mix of some 3-4 pounders.

On Sept. 7, the Game and Fish Commission unanimously approved the addition of 15 more lakes to the Community (Urban) Fishing Program, effective Jan. 1, 2014. This represents a 70 percent increase in the number of urban/community fishing waters that anglers will be able to choose from. 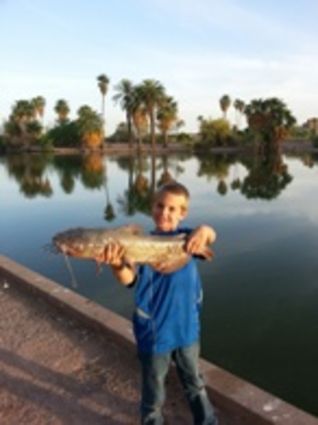