It was obvious that yearling gizzard shad were using the muddy, shallow, warm cove to avoid striped Bass predation. Adult Stripers cannot survive in 80-degree water without diving into deep cooler water. Without that cool refuge, Stripers cannot feed on these Shad that have found a safe thermal refuge.

Our next sample in deeper water was a bust as not many fish of any species are found near shore from Lone Rock to Wahweap. Yearling smallmouth Bass were found in modest numbers at all locations. It appears that smallmouth and small Stripers will survive the winter and provide good fishing in 2014.

The next sample was taken near Neskahi on the San Juan. We arrived in time to fish before dark when the electrofishing samples are run. We found scattered striper boils in Neskahi Bay before the lake narrows down and enters the Great Bend.

We could easily approach Stripers feeding on top and catch them with full-size surface lures. When they went down, catching was prolonged by fishing spoons at 30-40 feet near the location where boils were seen. It wasn’t long before the school popped to the surface again.

When fishing this fall, make sure to have two rods rigged, one with a topwater lure and the other with a spoon to maximize your catch. We caught 45 fish from 2-3 pounds in one hour before heading back to complete the survey.

There were lots more fish of all species on the San Juan. We found one cove with threadfin Shad, again in shallow water in the back of a cove. Smallmouth and Largemouth Bass were found in modest numbers. The most abundant fish were bluegill that had found a new home in the rocky and weedy structure in the backs of coves where aquatic weeds were growing.

Habitat has changed dramatically since last year. Brush that favored largemouth and crappie survival is no longer present. Smallmouth Bass and Stripers are now the most abundant small fish found along the shoreline. There were just enough of all species found to insure that each species will be represented well in 2014.

But, smallmouth Bass and Stripers will dominate for the next few years as Largemouth Bass and crappie now go into population recession due to lack of brushy cover.

Since water temperature returned to 80 degrees, there was little change in fishing success or technique. Adult Stripers are still feeding on bait in deep water near the mouths of canyons along the main channel in the main lake. Small Stripers are following plankton schools in the upper warm water layer. They can be caught trolling, casting or on bait in shallow open water. 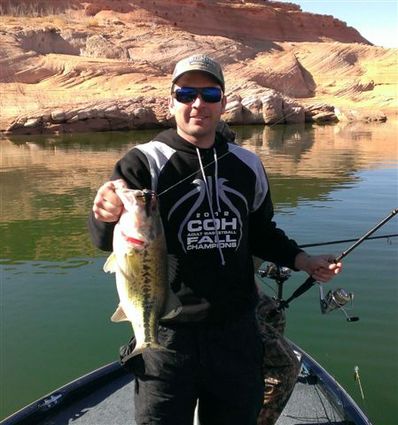 BIG BONUS ANYTIME -- Kyle Walker from Page, Ariz., recently caught a nice largemouth bass on the San Juan. Expect to catch more smallmouth and stripers but a bonus largemouth could happen at any time.

Smallmouth Bass are found on the first major drop off near shore. Look for them in 20 feet of water or deeper. Use a bottom-bouncing technique with a plastic grub or dropshot rig. catfish were commonly caught morning and evening off the back of the parked boat.

The best news is boiling Stripers near the major inflows of the Colorado, San Juan and Escalante rivers. There was much more surface action found in the afternoon than in the morning periods. Fishing is great and will continue to get better as the water temperature drops with cooler weather. It’s time to go fishing at Lake Powell