Here's Where To Catch A Cat - A Big Flat Cat!

Arizona is becoming the destination for monster flathead catfish.

The way some anglers look at Arizona as a fishing destination has begun to change since April when “Flathead” Ed Wilcoxson landed the heaviest recorded fish in the state’s history.

Word is getting out that The Grand Canyon State is home to many gargantuan flathead catfish.

Wilcoxson — after photos of his 76.54-pound flathead catfish taken out of Bartlett Lake were shared on fishing forums and media outlets across the World Wide Web — has received phone calls from interested anglers as far away as Africa, England and Australia. He said producers from the hit show Duck Dynasty on A&E requested Wilcoxson send them a short video of him fishing.

For the remainder of summer temperatures, anglers can escape the heat and fish the night for this square-tailed catfish that may attain weights up to 100 pounds.

“I believe there’s bigger ones than [my record] out there,” Wilcoxson said. “I hooked two last year that absolutely broke me off. Even fishing as much as I do, it took me by surprise.”

The lower Colorado River also is notorious for monster catfish, as was evident in 2008 by the 89.4-pound flathead catfish that was weighed and released by the Arizona Game and Fish Department through an electrofishing survey. Roosevelt Lake also is an exceptional flathead fishery. (See the department’s June 27 fishing report for photos and details.)

Said Phoenix-based catfish enthusiast Bobby Wright: “I haven’t seen so many people fishing for catfish since Ed caught his.”

The local economy is benefiting as well. Some Phoenix-based tackle shops have enjoyed marginal increases in sales of heavy-duty catfish rods, hooks and baits.

Steve Ortiz, store manager at the Mesa Sportsman’s Warehouse, said since the record went down in April, he’s seen an increase in sales of 7-foot, heavy-action, fiberglass spinning and bait-casting rods. In particular, he’s seen a spike in sales of outfits with reels that have a ”clicking” mechanism, which allows an angler who is not holding the rod to hear the clicking of line being taken from the spool — a popular method of waiting for a bite when targeting big flatheads.

“A lot of people have become aware of how big these fish are on the Verde chain,” Ortiz said.

Brent Klinger, assistant fishing manager at the Phoenix Cabela’s, said just after Wilcoxson’s record, he saw a 10-percent increase in King Kat catfishing rods, as well as stink baits. Large 10/0 and 12/0 circle hooks also are reportedly selling off the shelves. 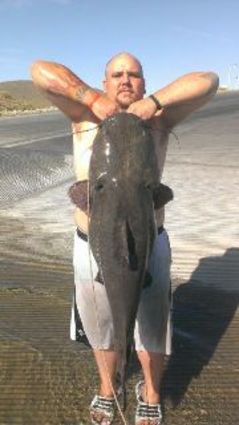 “We have pictures of big cats people have caught [posted] on a board in my department,” Klinger said. “People come into town and say, ’Wow, what can we use to get them?’”

“They come out here and I put them on a little 38-pounder and they’re just ecstatic,” Wilcoxson said. “I have people calling me from all over the world talking about this flathead.”