What you will see below this paragraph is what the fishing and conditions were a week ago. All of that has changed!The past two days I had the opportunity to fish and dive alongside my son Zach who is back from his 60 days of work in Australia. Every two months he returns for 30 days and I try to get on the water with him as much as I can. On Thursday we headed out into Biscayne Bay around 10 AM and found many schools of bait that we were able to catch easily with my Lee Fisher nets. I was surprised at how much bait had moved into the Bay and more surprised to see birds diving and fish exploding under them. The weather has been gorgeous and we had decided to fish offshore so we left the feeding Bay fish something that most would not (leave feeding fish to find other fish) and headed offshore in search of dolphins aka mahi mahi. We stopped just outside the reef to see if some kingfish or tunas might be interested in playing and had two fish on instantly. Bonitos! Lots of fun on light tackle but not what we were looking for. We moved further offshore where other boats were fishing and immediate were into loads of small to medium size dolphins. After catching thirteen dolphins in the six to eight pound range and releasing two dozen smaller ones caught on live baits and an assortment of Rapala hard plastics plus two wahoo one on live bait and one on a Williamson vertical jig we called it a day. On our way to the boat ramp we saw lots of birds diving and fish busting under the birds but passed on them and headed in. Yesterday with lobsters on our mind we again caught a well full of bait just in case we decided to do some fishing and passed up feeding bay fish and headed offshore. We Dove for about four hours and caught eight fat legal lobsters and a nice hogfish before a big squall line chased us in. Once in the Bay we again saw diving birds and crashing fish and put some live baits out. We missed a few Spanish mackerel and caught a jack then saw Charlie one of my clients who bought my last Pathfinder Bay boat fishing just south of us. Birds were diving all around him so we headed in his direction. Once there you could see he was into some hot fishing so we gave it a try. Casting live baits and Rapala X Raps we had a strike or fish on every cast. To our surprise these fish were all Spanish mackerel and bluefish. The surprise is that these fish are about a month early. Water temps in the Bay were right about 87 degrees much higher than the 72 degrees these fish prefer. After catching as many fish there as we cared we moved on. It was good to see that my last Pathfinder Bay boat was still catching fish! We fished a few other spots with no luck before hitting a large grass flat. Chumming with the live baits that we had left created a feeding frenzy and in the next hour or so we landed over a dozen sea trout with six of the fish way over 20 inches. One sea trout measured a little over 26 inches and weighed in at 5.5 pounds. This fish would have gone closer to seven had it been two months earlier when it was full of roe. Three other sea trout were in the four pound range and all of the fish were released. We also had large ladyfish, a snook and seven jacks to eight pounds. This is the kind of fishing you would expect in October not the last week of August.

It almost sounds like a broken record. Rain, wind, hot temperatures and mediocrity fishing that leads to less charters than our South Florida fishing guides and captains have ever seen. That is what I keep hearing from my fellow guides and captains. The weather conditions and sparse fishing charters is somewhat true but the fishing and the fishing results is not. When I have been on the water especially in Flamingo in Everglades National Park I have found plenty of and good quality fish to be around and hungry. 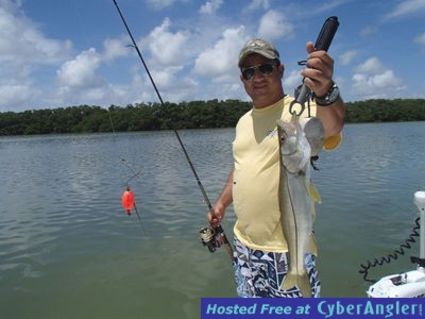 In Everglades national Park we have had lots of action from small to 14 inch mangrove snappers, ladyfish, sea trout, tripletail, redfish, tarpon, snook and sharks. And of course there always is the jacks, ladyfish, catfish and a few bluefish. All of this action is taking place using live pilchards, pinfish, Rapala plugs, Hookup lures tipped with Gulp and Trigger X baits and Cajun Thunders. Here in the Park our fishing has been all day long.