LMB virus, which primarily affects adult largemouth and smallmouth Bass during the summertime, has been discovered at Lake Pleasant (Maricopa County Parks) and Bartlett, Saguaro, and Roosevelt lakes on the Tonto National Forest.

All watercraft users leaving those lakes will now be required by law to clean, drain and dry their boats, which includes pulling the boat plug when exiting (A.R.S. §17-255). This already was a requirement by law at Lake Pleasant.

Whirling disease, meanwhile, has been confirmed at Lees Ferry, a trophy trout fishery just below Lake Powell on the Colorado River.

Snakehead fish have not yet been documented in Arizona.

While the LMB virus can affect Largemouth Bass, it doesn’t pose a risk to people and pets, and the water is safe for drinking-water supply and recreation.

“Largemouth Bass virus is not known to infect any warm-blooded animals, and any fish that are caught by anglers are safe to eat,” said Marc Dahlberg, Game And Fish water-quality program manager. “However, we always recommend that people thoroughly cook any fish they intend to eat, and never use fish found dead or dying for food.”

At this time, fishing at these waterbodies is still productive and there have been no recreational impacts.

Dahlberg explained that although the virus can cause mortality in Largemouth Bass, not all Bass become infected, and not every fish becomes sick. For instance, only five lakes in Texas suffered fish kills even though the virus was found in 23 of the state’s reservoirs.

“Usually the number of infected fish that die is relatively low compared to the entire population, with the virus mostly affecting older and larger fish,” said Dahlberg.

The virus has been found in 18 states dating back to 1991. In Arizona, Saguaro Lake, Bartlett Lake, Roosevelt Lake, and Lake Pleasant have tested positive for the disease.

Although other fish species can carry the virus, it only affects Largemouth Bass. It is not known exactly what triggers the activation of the virus into a disease outbreak, but it has been associated with stress events such as high water temperatures. The virus appears to diminish over time.

The Arizona Game and Fish Department emphasizes that there are precautions the public can take to help stop the spread of the virus, as well as other aquatic invasive species such as quagga mussels. One preventive measure that is vital is that people absolutely avoid transporting live fish or water from one body of water to another.

“You might be spreading an unwanted disease or even introducing an unwanted organism, such as quagga mussels, that could substantially affect a fishery or lake ecosystem,” said Dahlberg. “Don’t transport live fish caught from a lake — period. It’s the wrong thing to do and it’s unlawful.”

That’s why it’s important to clean, drain and dry your boat before leaving any lake at any time. In other words, remember to wipe down your boat, pull your plug, and dry your watercraft and equipment for at least five days before launching your boat on another water. Bass virus can live for up to seven days in standing water.

Other ways anglers and boaters can help stop the spread of aquatic invasive species:

• Dispose of all unused bait in the trash, never in the water.

• Never transfer live fish from one body of water to another.

• Rinse any mud and/or debris from equipment and wading gear.

• Drain any water from boats, bilge, bait buckets, and livewells before leaving the launch area. A mild mixture of bleach and water can be used to disinfect your equipment

• Allow everything to air dry before moving to another body of water. 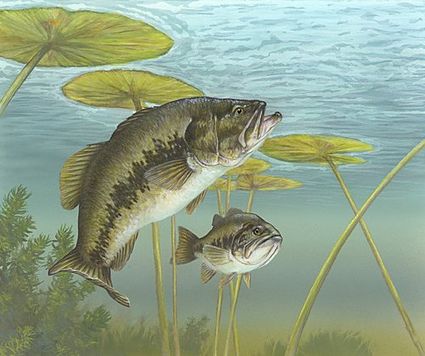 In 2009, the Arizona Legislature passed the Aquatic Invasive Species Interdiction Act, which authorized the regulatory measures known as “Director’s Orders.” They give the Arizona Game and Fish Department certain authorities and responsibilities, such as identifying and assessing aquatic invasive species presence, identifying affected waters, and establishing protocols and mandatory conditions for moving watercraft and other equipment so the public does not transport or possess these invasive organisms to other Arizona waterbodies.

More information on Largemouth Bass virus is available at: http://www.bassmaster.com/news/largemouth-bass-virus-lmbv-fact-sheet.