At Powell, Fish Early Or Late 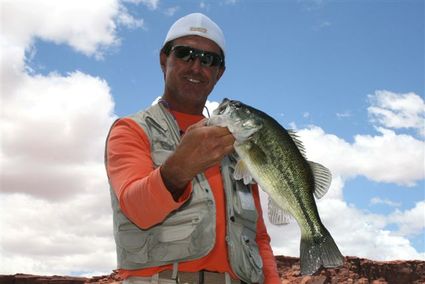 Lake level is slowly rising, but that is not as important as the rise in water temperature. During May the surface temperature was consistently in the 60s, which was great for bass fishing. During June, lake temperature have been in the 70s, which means young shad are growing large enough to draw interest from lake predators.

The immediate result of new shad presence is a dramatic change in sport fish behavior.

Last week’s report was all about stationary schools of striped bass that were easy to catch. Just go to the dam, Buoy 25 or Lake Canyon and catch all the fish you wanted. But today, those schools of stripers are on the move because they have found larval shad in open water.

Schools that have not moved for the last month are now leaving in search of food. Each morning stripers are now slurping (feeding in groups where 10-50 fish make slight surface disturbances) in open water from Padre Bay to Good Hope Bay. Surface feeding lasts about two hours each morning and may resume anytime during the day. Another two-hour feeding period occurs at dusk.

Slurping boils are strong morning and evening from Oak Canyon to the muddy water of the San Juan. I suspect the same events to be occurring in the Escalante but do not have reports from that location.

Catching fish out of slurps is not easy because the larval shad food source is so small that it is hard to match the hatch. A small, heavy spoon like a Kastmaster or small profile swim bait on a ¼ ounce jig head may be heavy enough to cast but small enough to draw interest from hungry stripers. Small LVs (lipless vibrators — rattletraps) cast beyond the fast moving slurpers and reeled back through the main group is another good technique.

Each morning there is more chasing than catching happening but that will change as shad grow larger. Bait fishing is still good for stripers that stay along the edge of the channel or return there after a two-hour feeding spree each morning. A good plan is to look for slurps early and then try bait fishing when open-water feeding subsides.

Striper schools may not necessarily be where they have been holding. A good way to find striper schools is to troll a deep-diving lure until a fish is caught. Then throw a handful of anchovy chum in the spot where the trolled fish is landed. Followers will likely be caught in abundance as they light up on the chum.

Fishing is still excellent but it takes a bit more effort now. I guess we have gone back to “fishing” instead of just “catching” as has been the case for the last two months.

On my last trip we caught largemouth, smallmouth, walleye and stripers using a variety of techniques including trolling, casting, and bait fishing with chumming.

Fishing is still excellent but plan on going early or late to find the best fishing success.