You might have seen the “Don’t Move a Mussel” signs that have been at some statewide lakes.

In an effort to reduce the spread and introduction of this serious invasive species, the outreach efforts will encourage boaters to clean, drain and dry their boats.

Following is a rundown of remaining sessions at press time:

July 27-28 and Aug. 10-11 at Lake Havasu: Game And Fish Aquatic Invasive Species Program personnel (non-law enforcement) will be at boat ramps to speak with boaters and hand out “Don’t Move a Mussel” information such as “pull your plug cards,” on July 27-28. On Aug. 10-11, law enforcement personnel will perform the same outreach.

quagga mussels are highly prolific, small, freshwater bi-valve mollusks originating from Eastern Europe that are triangular with dark black or brown zebra-like stripes. The Arizona Game and Fish Department considers quagga mussels to be a serious invasive species threat and their possession, movement and introduction into state waterways are prohibited by state law.

The National Park Service (NPS), in collaboration with other federal, state, and local agencies as well as partners, conducted an intensive four-day dive operation from June 10-June 14 to assess the extent of quagga mussels in lower Lake Powell and to remove all existing mussels. A total of 36 divers and 73 support staff destroyed 235 mussels.

Divers located mussels on moored boats, docks, and breakwaters dispersed throughout both marinas, but did not find any large colonies of mussels. The mussels varied from the size of a pea to the size of a quarter, which suggests a range of different ages.

The vast majority of mussels found were individuals. There were three instances of small groups of two to three mussels at Wahweap Marina. Mussel infestations typically consist of thousands of individuals in close proximity. With no current indications of veligers (larvae), and with the removal of the adult mussels, park officials remain optimistic that the focused effort eliminated the possibility of a reproducing population.

“We really appreciate everyone’s contributions to this operation. Fellow agencies, local businesses, and our visitors have all been supportive of the removal efforts,” said Superintendent Todd Brindle. “We could not have done this safely and efficiently without the cooperation of boaters. Everyone was patient with short delays and respectful of divers in the water.”

Boat certifications and inspections will continue as well as underwater surveys and removal. The park will continue intense monitoring efforts with periodic dive operations by park staff throughout the year. Although inspections are currently focused on the southern end of the lake, other marinas and docks will be assessed in the future. 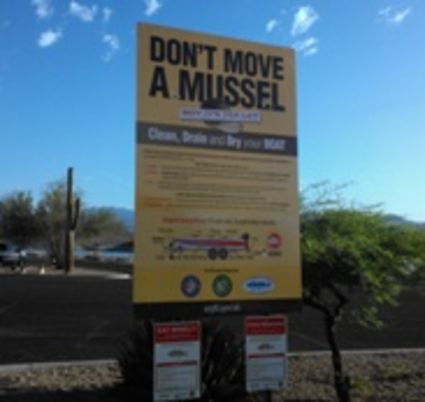 • US Fish and Wildlife Service