If You Haven’t Tried Fishing Here, Now Is The Time

One week after the spring fishing peak and fishing is still good. A lingering cold front has slowed fishing for bass slightly but stripers continue to eat bait in the southern lake.

One disturbing note is that lake level is still going down, making it uncertain that the lake will rise much during the normal runoff period. There is still time but the runoff is slow to start. A lower lake leaves brush out of the water and causes access problems at some ramps. Hite ramp is closed but other ramps at main access areas are in full operation.

The bass spawn is still on with many occupied bass nests seen in shallow rocky areas. The cooler weather has caused some nests to be abandoned but males will return to the nests with the warming trend scheduled for this weekend when daytime air temperatures are forecast to be near 80 degrees.

Walleye fishing is at its peak with many fish caught deep on live worm harnesses and bottom bouncing rigs. Bass anglers are finding success by casting soft plastic jigs tipped with a piece of night crawler and worked slowly along the bottom from 12-26 feet. Walleye are caught lakewide but are more abundant on the north end in the cloudy water.

Crappie are still found in the backs of the canyons. There are more fish caught in the remote areas of the San Juan and inflow areas near Hite. But crappie are caught throughout the lake in muddy water near the backs of canyons.

Stripers are still the biggest news on the fishing scene. Catches from the dam all the way uplake to Rock Creek are phenomenal. Many stripers have been tagged in this area for a contest sponsored by Cabelas. You must be pre-registered to win cash and merchandise. Register here: http://www.cabelas.com/browse.cmd?categoryId=107520480

Stripers are being caught on cut bait by chumming along the canyon walls and fishing with a small piece of anchovy or sardine. These 3-4 pound stripers are educated and can quickly steal bait visibly attached to a hook.

Those that use invisible fluorocarbon leaders catch fish that steal bait from hooks on monofilament line. Never attach a hook directly to braided line when bait fishing.

Some stripers are still hanging out at the back of the canyon in murky water. These fish are best caught by trolling or casting medium to deep diving hard plastic baits. The magic bottom depth is 25 feet where water is stained. 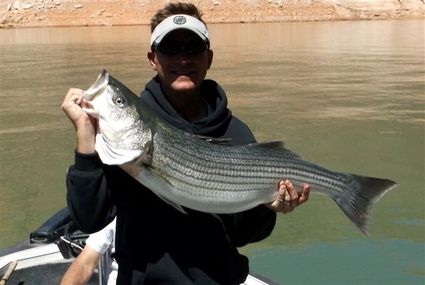 BIG ONES -- Stephen Maurer was fishing with his dad in the Escalante Arm, trolling and casting for stripers. He cast a gold deep-diving crankbait and caught a 23-pound, 37-inch striper. This is the fifth striper over 10-pounds caught this season and there are still more big ones out there to catch.

Stephen Maurer and family were casting tubes and cranks in the back of the Escalante Arm this week to catch many stripers up to 9 pounds. Maurer used a large gold deep-diving crankbait to land a 23-pound, 37-inch striper.

If another option is needed yearling stripers are eating plankton suspended at 25-30 feet in open bays near slick rock cliffs and coves. These smaller, but fatter, fish can be caught on bait or by casting and trolling small jerk baits where big schools of fish are graphed.

It is really hard to miss now when fishing at Lake Powell. If you have not yet tried fishing here but really would like to do it - This is the Time.