When Arizona became a state in 1912, many Wildlife species were in dire straits. Fifty years later, most Wildlife species, especially game animals, were abundant beyond the hopes of even the most enthusiastic conservationist.

A newly published book, Bringing Back the Game: Arizona Wildlife Management, 1912–1962, examines Wildlife management in Arizona during those formative years as sportsmen, and later professional game wardens and biologists, worked to return game populations to abundance and to provide more fishing opportunities for anglers.

This comprehensive 490-page book has 35 chapters in five sections, and includes more than 150 historical photographs.

Published by the Arizona Game and Fish Department, this is the third in a series of Wildlife histories that began with Man and Wildlife in Arizona: The American Exploration Period, 1824–1865, and continued with Arizona Wildlife: The Territorial Years, 1863–1912.

The Arizona Wildlife History Series now covers almost 140 years of efforts to conserve, use and manage Wildlife in the Grand Canyon State — a significant achievement.

Author David E. Brown is a retired biologist and adjunct professor at Arizona State University and the University of Arizona. He worked for the Arizona Game and Fish Department from 1961 to 1988. 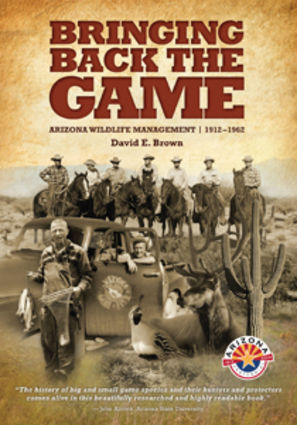 Bringing Back the Game is available for $19.95. It and the other books in the Arizona Wildlife History Series are available for sale at all Arizona Game And Fish offices, or by downloading and printing the publications order form at http://www.azgfd.gov/publications.