The $1 Million dollar award was the largest award ever for catching a fish. 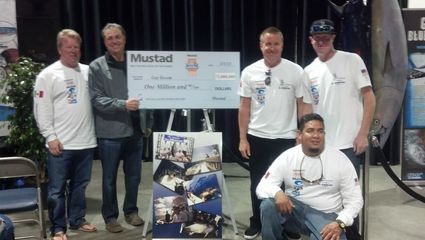 This $1 Million dollar check from Mustad was awarded to Guy Yokum because he used a Mustad hook. Yokum was the first in 2012 to submit and get his world record fish on a Mustad hook. Capt Greg DiStefano, in the black baseball cap, drove the boat and trained the crew for the record.

The $1 Million dollar award was the largest award ever for catching a fish.

This presentation was made after the IGFA World record presentation at the Fred Hall fishing show in Long Beach, CA, March 7, 2013 at 2pm on the main stage. 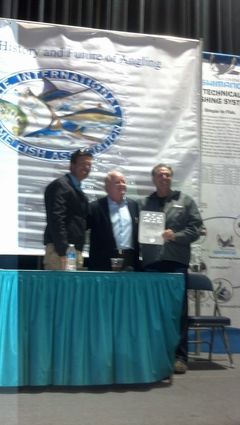 This is a picture of (l to r) Rob Kramer, IGFA President, Mike Farrior, IGFA Trustee and Historian, Guy Yokum, the Angler holding the IGFA All Tackle World Record for Yellowfin Tuna at 427 pounds.#, The fish was caught Sept 18, 2012, approx 180 miles South of Cabo San Lucas. Guy Yokum, a concrete contractor for Dana Point, CA had an excellent crew who trained to set a World Record and had targeted Yellowfin Tuna. This is the 2nd Yellowfin Tuna WR over 400 pounds caught in the last 2 years. in Nov 2010, Mike Livingston landed a 405 for the first Yellowfin Tuna landed over 400 pounds. Before 2010 the record stood at 388# since April 1977, also caught off the coast of Baja California, MX.