By CDW
Colorado Division of Wildlife

Klinglesmiths Honored As 2012 Landowners Of The Year

DENVER - The Klinglesmith family of Meeker has been named the 2012 Wildlife Landowners of the Year by colorado parks and wildlife.

Lowell and LoAnn Klinglesmith, together with their youngest son Lenny and his wife Jackie, run the LK Ranch south of Meeker, with 13,000 contiguous deeded acres in the middle of some of the most important big-game habitat in the state. Over the past 10 years, the family has greatly expanded the ranch, placed most of it under conservation easement and implemented an integrated Wildlife habitat and livestock management program. They offer high-quality guided and public hunts on the ranch while managing their land to support big game, non-game and imperiled species like the greater sage-grouse.

"Colorado Parks and Wildlife is proud to honor this family who has consistently placed Wildlife resources as a priority along with their livestock operation," said Ken Morgan, Private Lands Program Manager. "The Klinglesmiths know from experience that maintaining the health of the land is vital to the long-term sustainability of their ranch."

The LK Ranch features a mosaic of vegetative communities, from irrigated hay and sage to mountain shrubs, aspen and conifers which roll up from an elevation of 6,400 feet to 8,200 feet at the border with the White River National Forest. A key aspect of the Klinglesmiths' ranching operation is the commitment to short-term, high-intensity rotational grazing designed to improve the quality of forage for Wildlife and reduce impacts to riparian areas. The family has also actively manipulated sage, shrubs, aspen and conifer stands to promote nutritious new growth to support Wildlife.

Significant numbers of elk, mule deer and Black Bear call the ranch home each year, but the property serves as a critical migration pathway for the seasonal movements of mule deer and elk herds between their summer and winter range.

The LK Ranch is in an area where CPW has been trying to reduce elk herds to manage game damage impacts. One of the biggest challenges in achieving adequate harvest is applying sufficient hunting pressure on elk that seek refuge on large blocks of private land. Many landowners generate income from leasing to outfitters or charging trespass fees for hunters pursuing bull elk, and so are reluctant to allow cow hunters for fear of disturbing bulls. In addition to the more than 25 public mule deer and elk hunters granted access to the ranch each year, the Klinglesmiths donated a total of 15 guided and unguided hunts to the public in 2009 and 2010.

The ranch is also located within the largest remaining patch of occupied greater sage-grouse range in the Meeker area.

"The Klinglesmiths are the epitome of the rural, hard-working cattle rancher and they serve as tremendous role models in northwestern Colorado," said Meeker District Wildlife Manager Bailey Franklin.

Colorado is known for its 23 million acres of public lands, but four of every 10 acres in the state are privately owned. Private lands are critical to maintaining populations of mule deer, pronghorn, elk, sage-grouse, prairie falcons and a host of grassland species. Privately held water rights, held in reservoirs and released into streams, supports both warm- and cold-water sport fishing across the state.

The Wildlife Landowner of the Year Award is part of the colorado parks and wildlife's Landowner Recognition Program, which has worked to highlight exemplary land management practices and recognize landowners who have demonstrated outstanding leadership in Wildlife conservation since 1982.

Nominees for the Wildlife Landowner of the Year must be residents of Colorado or own at least 160 acres in the state, and be actively engaged in farming or ranching business as owners, lessors, lessees, or managers. Evaluations are based on a range of criteria, including current land management practices, Wildlife habitat improvements, accommodations for public hunting and fishing access and leadership in the promotion of sound Wildlife practices on private lands.

Other finalists for 2012 were Jan Coury and Dave Nelson of the Buckhorn Ranch in Gunnison, and Stan Young and Jenny Arpke of Mack. 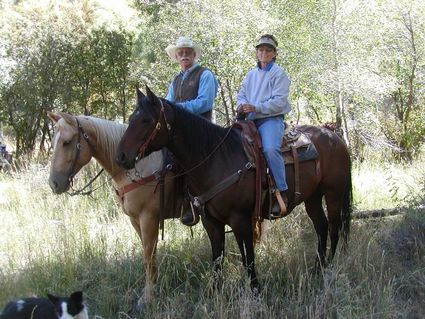 "Farming and ranching families have a connection to the landscape that many of us have lost," Morgan said. "They know that sound soil, water and vegetative management practices that benefit their agricultural operations also benefits Wildlife. The health of the land is not an abstract concept to them and that's worth celebrating."

The Klinglesmiths were recognized at the National Western Stock Show Jan. 22 in a brief ceremony before the Pro Rodeo.