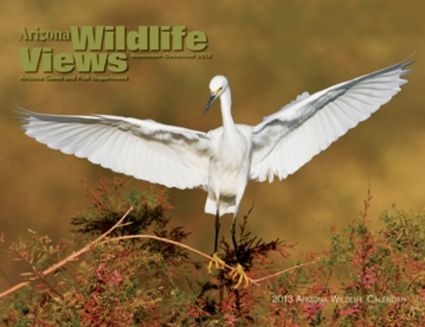 A snowy egret with enormous white wings outspread, balances precariously on a tiny yellow branch. The image, captured by Bryan Keil of Scottsdale, Ariz., is the grand prize winner in this year’s Wildlife photo contest.

The contest, sponsored by the Arizona Game and Fish Department, attracted more than 400 entries from across Arizona and beyond. Winning images have been published in a full-size 2013 Wildlife calendar in the November–December issue of arizona wildlife views magazine. The other 12 winning photographers are the following:

Due to the talent of Arizona’s Wildlife photographers, and the high number of outstanding entries received, Game And Fish chose 38 honorable mention images, as well. These photographs are also featured in arizona wildlife views. The names of photographers receiving honorable mention are posted on the photo contest’s webpage, http://www.azgfd.gov/photocontest.

The department welcomes new subscribers to Arizona’s award-winning magazine about Wildlife and outdoor recreation. It usually costs just $8.50 for six issues (one year), but right now subscriptions are on sale at seven issues for $7. Subscriptions are available at http://www.azgfd.gov/magazine or by calling (800) 777-0015.

For those who simply want to purchase the calendar issue, it will be sold at all Game And Fish Department offices for $3 beginning in mid-November.