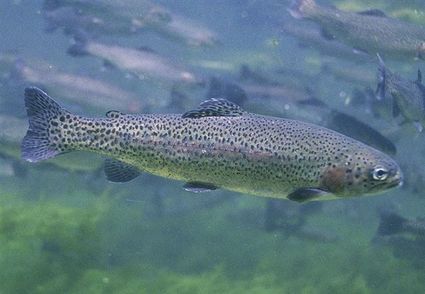 November promises to provide excellent fishing at Urban Fishing Program lakes. The Phoenix and Tucson urban lakes have been loaded with catfish all fall with one last stocking in early November.

Additionally, 15,000 bluegill were stocked. And, good news: The first trout delivery for the winter season began on Nov. 15 (see below for more information on the trout and bluegill stockings).

Top baits for catfish are hot dogs, shrimp, and stink baits with fish biting throughout the day. Anglers are enjoying a good catfish bite up to 10 days after stockings, with plenty of cats in the 2-pound range. Bluegill are biting well on a variety of baits (mealworms, worms, corn) and are ready to take small nymphs and poppers in the late mornings and afternoon. Using light tackle with small hooks and bobbers will keep you and the kids busy catching bluegill.

From the end of October through the first of November, Green Valley lakes (Payson) were stocked with rainbow trout. trout up to 15 inches are biting well on Powerbait, worms and small spinners and jigs.

The fall catfish stocking season wrapped up the week of Oct. 29 – Nov. 3 with another 13,000 pounds of fish delivered to the 20 Urban Fishing Program waters in the Phoenix and Tucson areas. Now fish stocking trucks switch from delivering catfish to trout. Lake temperatures are cooling down towards the 66-degree target for trout, a cold-water species.

The winter trout-stocking season began Thursday, Nov. 15. rainbow trout ranging from 10-14 inches will be stocked at two-week intervals throughout the winter. More than 100,000 trout from Colorado have been ordered for delivery to urban waters during the four-month stocking season that lasts from November to March.

2012 Urban Fishing Licenses Half Off

If you recently found out about the great fishing in the urban lakes and the start of the trout-stocking season, we have a deal for you. The 2012 Class U (Urban Fishing) license is 50 percent off during the last two months of 2012. Stop by a Game And Fish office or any of our sporting goods or retail license dealers and ask for your 2012 discounted Urban Fishing License for $9.25 (same price for non-residents). The Urban License is valid for all fish species, including trout, catfish, bluegill and Bass, and is valid through the end of 2012.

A truckload of 15,000 bluegills were delivered to all Urban Fishing Program waters by early November. Catchable-size bluegills are delivered twice each year to Urban waters, in the fall and spring.

Bluegills are fun to catch for anglers of all ages and will bite all day long. The best baits are mealworms or small pieces of night crawlers. Use lighter tackle, smaller hooks in the size 10-12 range, and small bobbers for the best bites. Daily bag limits for bluegill and other sunfish are 10 fish per person at Urban Lakes and five fish per day at Urban Ponds.