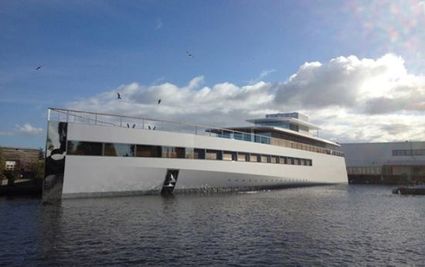 LAUNCHED -- Steve Jobs' 256-foot yacht Venus was launched on October 29, 2012. Rumors were that plans for the boat had been shelved during Jobs's illness. But now the yacht has just had its posthumous launch.

Before his death, former Apple CEO Steve Jobs was planning to build one of the world's most unusual yachts — a sleek, all-aluminum cruiser that looked more like a “Battlestar Galactica” fighter than leisure yacht.

Rumors were that plans for the boat had been shelved during Jobs's illness. But now the yacht has just had its posthumous launch.

The boat's name is Venus (alas, not "iYacht.") According to executives at yacht-building companies and photos from Superyachttimes.com, Venus set sail from Feadship's Koninklijke De Vries shipyard in Aalsmeer, the Netherlands, where it was built. (Feadship executives declined comment).

The ship is 256-feet long and filled with soaring windows, oversized iMacs and technical wizardry beyond its light aluminum hull, according to people close to the project.

The ship was reportedly designed by Philippe Stark, the famed French architect and designer who also designed the yacht "A" for Andrey Melnichenko. (Read more: Russian Billionaire Builds Largest Ever Sailing Yacht.)

As at an Apple store, the cabin windows were large panes, almost floor to ceiling, and the main living area was designed to have walls of glass that were 40 feet long and 10 feet high. He had gotten the chief engineer of the Apple stores to design a special glass that was able to provide structural support.

By then the boat was under construction by the Dutch custom yacht builders Feadship, but Jobs was still fiddling with the design.

The yacht docked at the De Vries shipyard in Aalsmeer, and as Jobs said,

"I know that it's possible I will die and leave Laurene with a half-built boat. But I have to keep going on it. If I don't, it's an admission that I'm about to die." (Read more: Hard Times in the Mega-Yacht Market)

Immediately after his death, some yachting executives speculated that the project was being halted or scrapped by the Jobs family. But work continued and one Dutch Web site said Jobs' widow Laurene and three of their children were at the launch. The family gave each member of the shipbuilding staff an iPod shuffle with "Venus" inscribed on the back.