Bass Fishing Consistent All Over The Lake

Fishing out of Wahweap is hot and cold. Fishing is super hot for the first hour of light in the morning. Toss a small profile surface lure like a Sammy or Sugoi splash toward the shoreline for fast action from smallmouth bass and juvenile striped bass.

On one morning recently, one of the hottest spots was the Stateline ramp cove. A Shad school moved under the courtesy dock at first light and was quickly surrounded by bass and Stripers. Lures landing on the outer perimeter of the Shad school were quickly engulfed. Shore fishermen casting topwater would be quite successful on the swim beach side of Stateline ramp from first light until 7 a.m. (MST).

We left the ramp and went straight to Sand King Cove (Wahweap Bay) to catch a few more bass and Stripers on the surface. Then we tried the cove on the left hand side of Castle Rock and caught more in the shade of the cliff wall.

But, all good things came to end as the sun peeked over the eastern horizon. We were very excited to see surfacing fish as the boat made it through the Castle Rock Cut. Unfortunately, we found that the widely scattered splashes were made by a school of big gizzard shad frolicking on the surface. The gizzard frolics can be identified by widely spaced splashes punctuated by a little tail flip as they hit the water. These were the only “fish boils” we saw. All of our other fish were caught blind casting toward the shore.

We then graphed unsuccessfully to find striper schools in locations they had occupied for the past few weeks. Stripers are apparently really scared of full moon Halloween stories in October. Fishing for Stripers has slowed to a crawl in the southern lake.

Luckily the uplake Stripers are still going strong. Great reports are coming from the San Juan and Good Hope areas. Spooning near Neskahi Canyon (San Juan) resulted in a 100-fish catch of 3-6 pound Stripers for one party early this week.

Bass fishing is very consistent all over the lake — even at Wahweap. Drop-shotting plastic shad-shaped worms and senkos, casting plastic grubs and swimbaits and retrieving surface lures are all effective techniques now. Best colors are chartreuse and watermelon. 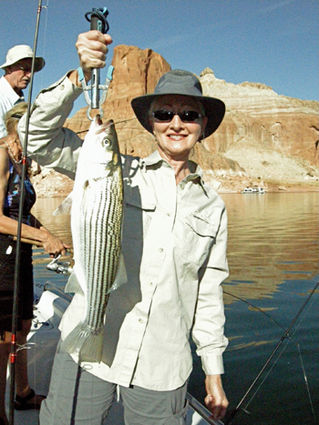 A GREAT TIME! -- Nancy Johnson, Tucson Ariz., had a great time catching bass and this big striper in Gunsight Canyon. Stripers are hitting spoons at depth during the day and providing a little surface action at first light in the morning.

Just find a quick drop off near the brushy shoreline or a rocky reef in open water. Then use your favorite bass lure to catch smallmouth bass and an occasional largemouth. Work the bait slowly with a lot of fall-time in tree-lined areas for best results.

With water temperature falling and Shad moving on shore, bass have moved into shallower water. Look for bass at depths of 10-20 feet.

As the moon fades, striper fishing will pick back up in the southern lake. For now, fish for bass or head to Rock Creek and places upstream to get Stripers.