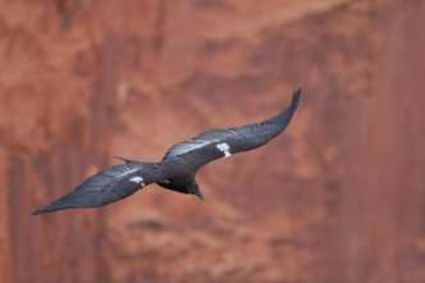 GRAND CANYON, Ariz. — A biologist from the Peregrine Fund was finally able to obtain visual confirmation of a wild-hatched california condor chick that had been suspected, but not seen, in a nest cave deep in Grand Canyon National Park. This confirmed sighting brings the total number of wild condor chicks produced by the Arizona-Utah flock this season to three.

“Based on our crew’s observations, we suspected a chick had hatched sometime in early May,” said Chris Parish, head of condor field operations for The Peregrine Fund. “We didn’t want to make it official, however, until we had visual confirmation of the chick with our own eyes.”

The first two chicks were confirmed in May with one each at the Grand Canyon and Vermilion Cliffs National Monument.

There are now 77 endangered condors in the wild in Arizona and Utah, including the newest members of the flock. A total of 18 chicks have hatched in the wild since condors were first reintroduced in Arizona in 1996.

The new chicks are expected to fledge or take their first flight from the nest in late fall. Young condors are dependent on their parents for approximately 18 months.

However, these birds face significant challenges in growing their population. Not only does it take six years for most to reach breeding maturity, but also they only produce one egg every other year.

In addition to the species’ slow reproduction, lead poisoning continues to be the leading cause of death for condors in Arizona-Utah, with 23 deaths confirmed since 2000.

Condors ingest lead fragments after eating gut piles and animal carcasses that have been shot with lead ammunition. The bullets disperse dozens of tiny particles of lead as small as a grain of salt throughout the animal. These particles are enough to cause lead toxicity in condors when they scavenge on the remains.

Since 2005, the Arizona Game and Fish Department has offered a voluntary non-lead ammunition program for hunters in northern Arizona, the condors’ core range. And, the program has seen high participation rates thanks to hunters’ voluntary willingness to partner in Wildlife conservation. The effort has resulted in up to 90 percent of hunters taking efforts to reduce the amount of lead available to condors.

Condors have now expanded their range into southern Utah and efforts are underway by the Utah Division of Wildlife Resources to begin a similar program this year to benefit condors foraging in Zion National Park and the surrounding areas.

“Arizona Game And Fish has been very encouraged by the overwhelming support that hunters have given the voluntary non-lead effort to benefit condors. When hunters learn that lead ammunition harms Wildlife, they often are willing to use non-lead bullets or haul the remains out of the field,” said Kathy Sullivan, the Game And Fish condor program coordinator.

For more information on condors and lead poisoning, visit http://www.azgfd.gov/condor.