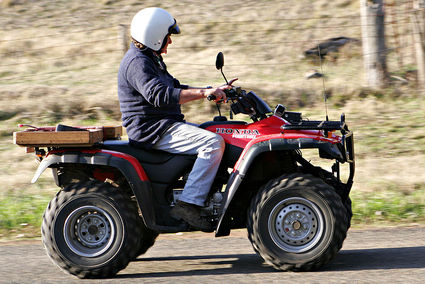 An accident that injured a woman and her four grandchildren recently was a powerful reminder of the need for all-terrain vehicle riders to wear helmets.

The woman packed her grandchildren onto an ATV meant for one person and went for a ride Sunday on a dirt lot in Gilbert.

But, the outing ended abruptly when she drove into an irrigation ditch, sending her and all four kids to the hospital. The woman, 50, sustained head injuries. Three girls, ages 3, 4 and 5, suffered multiple, non-life-threatening injuries, and another 3-year-old girl had minor injuries, Gilbert fire officials said.

No one was wearing a helmet.

“The accident is a prime example of why it is vital to wear a helmet when operating an ATV,” said Jimmy Simmons, off-highway vehicle law enforcement program manager for the Arizona Game and Fish Department.

The woman’s head injuries could have been prevented or been less severe if she had been wearing a helmet, according to Simmons. He also stressed that state law requires anyone under 18 riding an ATV to wear a properly fitted and fastened U.S. Department of Transportation-approved helmet.

“Those kids are very lucky they weren’t seriously hurt,” Simmons said. “Kids’ skulls aren’t fully developed, so they are much more prone to cracking their skulls and traumatic injury.

“The operator was also carrying too many people for the design of the vehicle. The extra weight can affect the ATV’s balance, and having so many passengers can interfere with the operator’s ability to drive safely.”

And, even though anyone older than 18 is not required to wear a helmet, Simmons pointed out, Game And Fish still recommends that adults wear them while operating an ATV.

According to information provided by the Arizona Department of Health Services, wearing a helmet can mean —

• Up to a 64 percent reduction in non-fatal head injury

• Up to a 42 percent reduction in the risk of death

The health services department also noted that people with a history of non-fatal ATV injuries were less likely to report current use of helmets or protective equipment.

In the Gilbert accident, police are investigating the woman for child endangerment and reckless driving.

Game And Fish promotes safe and responsible ATV use.

“Riding ATVs can be a fun family activity that allows folks to get out and enjoy time together outdoors. But without proper safety gear and responsible use of ATVs, things like this accident happen,”

Simmons said. “By taking the proper precautions, you can help keep an enjoyable outing from turning into a bad day.”