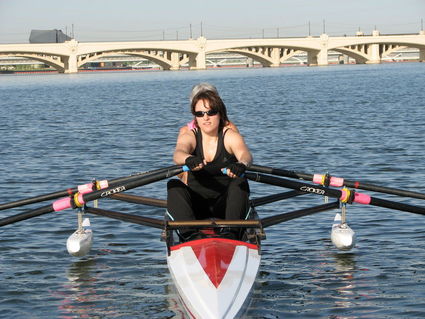 In the cold of winter when rowers cannot get out on the Charles River in Boston, committed athletes still compete. No, they are not in sleek rowing shells but rather on the torture machine known as the rowing ergometer.

The outside sport moves inside to the hockey stadium at Boston University. The event — the C.R.A.S.H.-B's World Indoor Rowing Championship — draws people from around the world.

Four adaptive athletes are heading for the C.R.A.S.H.-B's on Feb. 19. Linden Aitken, Jesse Antunes, Eve Hampton, and Jason Graber have been training on the indoor rowing machine as well as rowing on-water in preparation for this day. Their power and spirit is amazing as they leave their wheelchairs and transfer to the indoor ergometer or boat.

All four rowers found the Rio Salado Rowing Club "Can Do Crew" for different reasons. They discovered a sport that allows an incredible cardiovascular workout that makes them use muscles other than those taxed all day in wheeling themselves around. While each has participated in a number of adaptive sports, rowing has provided a workout that enhances strength, endurance, and cardiovascular fitness.

Rio Salado Rowing Club is an established 501(c)3 in Tempe, Ariz. Origins of the “Can Do Crew,” its adaptive rowing program, began in January 2010 as an initiative to explore how its club could bring rowing’s many health, fitness and social benefits to people with functional limitations. Rio Salado adaptive rowing has grown tremendously. Highlights during the first two years include the following:

· an eight-week summer erg training program for a wheelchair basketball team and other local adaptive athletes,

· erg demonstrations at numerous disability organization events, including an American Council of the Blind conference with Paralympic rower Ariel Gilbert,

· a research study with a university biomedical engineering professor to measure the physiological benefits of erg workouts for people with spinal cord injuries, and

As it is in a boat, teamwork has been the key to success for Rio Salado’s adaptive rowing initiative. From the start, the club made a deliberate strategic decision to collaborate with area disability and community organizations. The active involvement of these partners in developing, promoting and expanding adaptive rowing opportunities has been a major factor in the growth of adaptive rowing.

RSRC has no paid staff, so club activities, including adaptive rowing, rely totally on the time and talents of volunteers. The support from the local rowing community has been overwhelming: Since January 2010, rowers from area junior, collegiate, and city parks and rec programs have joined Rio Salado members in contributing more than 1,200 hours to organize adaptive rowing events, develop workouts, coach adaptive rowers, provide volunteer trainings, move and adapt equipment, and perform innumerable other tasks to help the program succeed.

For more information about Rio Salado RC, see the club’s Web site and Facebook, or e-mail the club’s adaptive rowing via adaptive@riosaladorowing.org.

The adaptive rowing program relies entirely on the time and talents of many volunteers and community partners. Support to make this competition possible for the athletes would be greatly appreciated. Costs for transportation, lodging, meals, and event registration are high. Tax deductible donations can be made online at: http://www.riosaladorowing.info/adaptive.html (please be sure to indicate the donation is for the adaptive program).

To find out more about adaptive rowing whether as an athlete, volunteer, or supporter, go to adaptive@riosaladorowing.org .